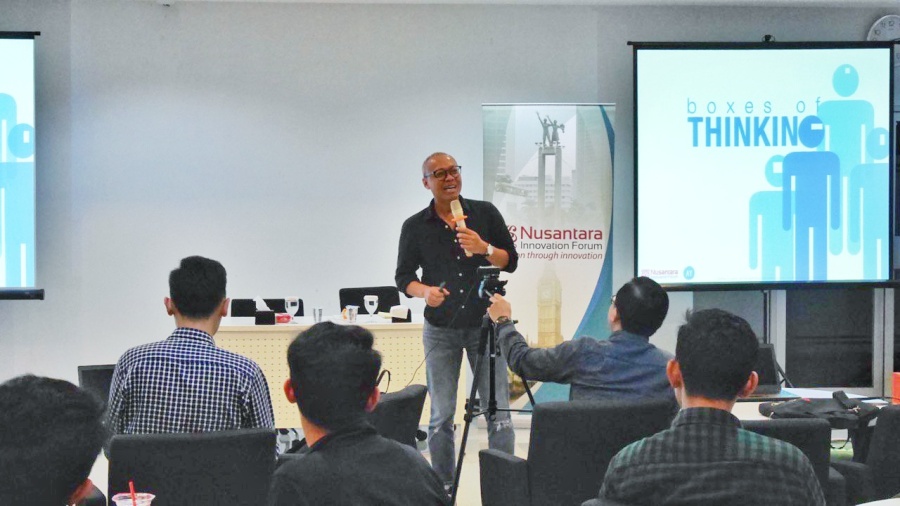 On Sunday (Oct 27th, 2019) I attended a pre-establishment session of the Nusantara Innovation Forum (NIF) chapter Indonesia. Although the name is using ‘Nusantara’, NIF is centered in London, the United Kingdom, and was established originally around 2017.

I was actually in the UK in 2017, but heard about NIF from one of its advisor, Ibu Ayleen Wisudha, later after the establishment. Ibu Ayleen informed me last month that there will be NIF Chapter Indonesia, and she connected me with some cool people here. To my understanding, in short, NIF’s mission is to down-streaming research into implementation by connecting inventor, innovator, and investor – or vice versa, publishing best-practice or innovation into scientific papers for Indonesia.

Anyway, the pre-establishment session of NIF chapter Indonesia last Sunday was open to public and included a sharing session from Pak Ahmad Yuniarto (we call him Pak AY), ex-CEO Schlumberger Indonesia and the founder of Biru Peduli Foundation. Pak AY shared a thought about Boxes of Thinking.

We heard lots of advises to think out of the box during creative / innovative processes to solve challenges. Nevertheless, it’s observed that the mantra does not necessarily work most of the time for many people. Alas, most of us not sure if we’re out of the box already, or still inside. Therefore, quoting Pak AY during the session, he highlighted that “knowing the box is more important than being inside or outside. Creativity and Innovation do not come from being outside the box. They come from deliberately choosing which boxes we will use to think.”

Pak AY started with an interaction to audience to show how we’re vulnerable with “Gravity of Familiarity”, or in our daily words known as “Assumption” or “Prejudgment” – a tendency of jumping to conclusion with only half/limited information. In his explanation, these assumptions are basically the boxes in which most people refer whenever the mentioned the phrase of ‘out of the box’.

Knowing our current assumption (box), will help you to challenge them – or even to get out of it (out of the box). Before able to go out of the box, we have to aware on which box are we. Staying in only a limited box – or worst, in incorrect/irrelevant boxes most probably fails creativity and innovation.

“Contrary to popular belief, creativity and innovation will blossom when there are sufficient and appropriate structure and constraint.”, Pak AY added.

Well, I kinda have similar believe on this since years ago. It’s indeed a good reminder. Thinking out of the box advise is a big non-sense when we don’t know in which box we’re currently standing now (or what assumptions do we use). And the process of creativity and innovation is not entirely free-flexible-and relax; some tension might also arise (if possible, needed) during the process.

Now that we know which box we use – we can considerably change to some boxes to think and to produce what’s needed by society around us 😉 Thanks Pak AY!

Error: Twitter did not respond. Please wait a few minutes and refresh this page.